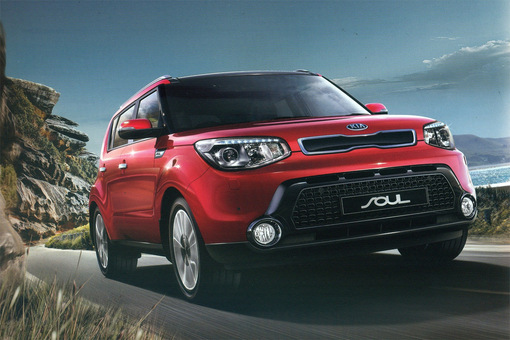 Kia Motors (Lanka) has announced that the new Kia Soul, the Korean car marker’s inimitable compact crossover SUV, has arrived in Sri Lanka exclusively for enthusiasts who believe that a car must have a distinct character and soul.

Considered one of the most widely recognized and individualistic models in the Kia Motors vehicle line-up, the new Kia Soul combines seamless enhancements and fresh new features that have made it a best-seller among in the ‘box car’ segment in many markets.
Powered by a 1.6 litre Gasoline Inline 4 — Cylinder engine with 6-speed Tip Ironic automatic transmission, the 2016 Kia Soul is the second generation of the model, and delivers an even more dynamic but stable ride, the company said. An interior cabin with enhanced space that can accommodate five adults with ease offers class-leading rear seat leg and shoulder room.

“Describing the new Kia Soul as a refreshing blast of design inspiration is not an exaggeration,” Andrew Perera, Chief Operating Officer of Kia Motors (Lanka) said. “It has been reinvigorated and refined inside and out, with sporty, SUV styling, a host of cutting-edge technologies and upgraded performance.”

“The instantly recognizable high squared shoulders and robust wheel arches give the vehicle a sturdy and aggressive on-road presence which, when coupled with its performance capability, makes the Soul at home even among larger SUVs. We expect its proposition of ‘futuristic and funky meet chic sophistication’ to be a key selling point for the target segment.”
Priced between Rs 5.625 million and Rs 5.73 million based on the options chosen, the 2016 Kia Soul comes with 17-inch or 18-inch alloy wheels with anti-lock brake system (ABS) and rear disk brakes, 4.3 inch touchscreen radio MP3 player with reverse camera and Bluetooth, driver and passenger airbags, motor-driven power steering, audio remote on the leather-wrapped steering wheel, roof rack, electric folding outside mirrors and Park Assist System. Among the many options available for customisation are panoramic sunroof, leather seats, colour packages and smart key.

Besides the Kia Soul compact SUV, Kia Motors (Lanka) markets the Kia Sorento and Kia Sportage SUVs, the Kia Optima luxury sedan, the Kia Cerato mid-sized sedan, the Kia Rio subcompact sedan, the Kia Picanto compact car and the Kia Grand Carnival Multi-purpose Vehicle (MPV) in Sri Lanka.
A maker of quality vehicles for the young-at-heart, Kia Motors Corporation (www.kia.com) was founded in 1944 and is Korea’s oldest manufacturer of motor vehicles. Over 3 million Kia vehicles a year are produced in 10 manufacturing and assembly operations in five countries which are then sold and serviced through a network of distributors and dealers covering around 150 countries. Kia Motors Corporation’s brand slogan — “The Power to Surprise” — represents the company’s global commitment to surprise the world by providing exciting and inspiring experiences that go beyond expectations.