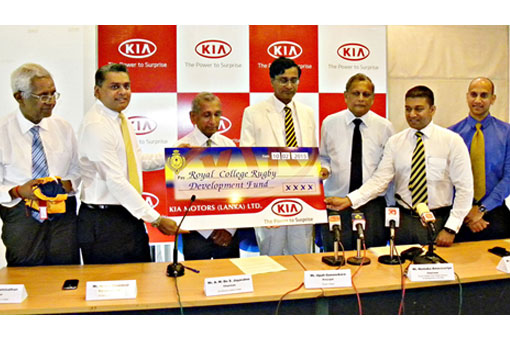 Kia, the iconic Korean automobile brand, has enhanced its support to Royal College’s rugby development programme with a larger, three-year commitment. Entering its fourth year in 2015, Kia’s sole sponsorship of Royal Rugby will now go beyond the 1st XV to include the Under 14, Under 16 and Under 18 rugby teams of Royal College, in an effort to support the College’s current and future requirements in this sport.

KIA’s new sponsorship agreement was formally signed at the Royal College Skills Center by the directors of KIA Motors (Lanka) Limited and the Chairman and members of the Royal College Rugby Advisory Committee.

As Sole Team Sponsor, KIA will have branding rights for the warm-up and match jerseys of the Royal College rugby teams in all the age-groups covered, at all inter-school games and tournaments.

Addressing media at the signing of the sponsorship agreement, KIA Motors (Lanka) Managing Director Mahen Thambiah said: “KIA is a brand that has a strong association with sport on a global scale. At the local level, our involvement with Royal College Rugby over the past three years has given us a lot of pleasure, as it mirrors our position in the market, where the brand is seen as dynamic, versatile, stylish and youthful.”

“We also believe in long-term commitment, which is why, after sponsoring the 1st XV for three years, KIA has extended its support to the Royal College Rugby Development Fund for three more years and widened the scope of the sponsorship to encompass the younger players,” Mr. Thambiah said. Royal College’s rugby history dates back to 1916. Two of the most looked-forward-to annual rugby fixtures in the schools’ rugby calendar, for the Bradby Shield and the Michael Gunaratne trophy, involve Royal College and arch-rivals Trinity College and St. Thomas’ College respectively.

On the world sporting stage, KIA is the Major Sponsor of the Australian Open tennis championship, a FIFA Partner and was the sponsor of the 2014 FIFA World Cup in Brazil. Rafael Nadal, one of the greatest tennis players of the modern era, is KIA’s Global Brand Ambassador. Other sports-related sponsorship of the Korean car brand include a 5-year deal for exclusive naming rights to the historic Oval ground, primary shirt sponsorship of Surrey County Cricket Club and support to US basketball as the official automotive partner of the NBA.