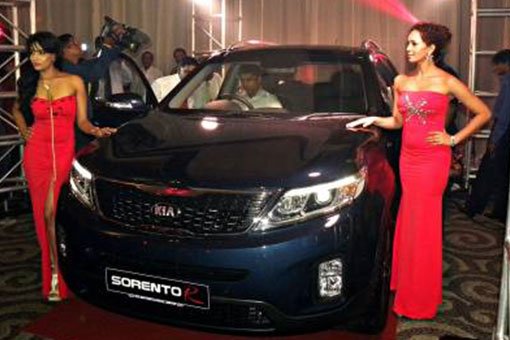 As its predecessor continues to turn heads on Sri Lanka’s roads, Kia’s 2013 Sorento SUV arrived in Colombo recently to a preview by loyal brand enthusiasts.

Key Kia customers invited to celebrate the ‘Distributor of Distinction’ award won recently by Kia’s sole distributor in Sri Lanka, were accorded the first look at this definitive automotive marque, as Kia Motors (Lanka) thanked them for their patronage over the years. More than 300 guests including sports celebrities were present at the preview at the Oak Room of the Cinnamon Grand.

Even smarter and safer than its 2012 version and endowed with enhanced styling, the new seven-seater offers several noteworthy new features that will reinforce its status as one of the most popular vehicles in Sri Lanka in its category, sole distributor Kia Motors (Lanka) said.

“Kia’s approach of creating design-driven vehicles with all the advances of technology, performance, features, and comfort are exemplified in the Sorento, and the 2013 model takes this concept even further,” said Mahen Thambiah, Managing Director of Kia Motors (Lanka) Ltd. “It is packed with features that are options on other high-end SUVs and can be customized with even more options that make driving a Sorento a sheer pleasure.”

Portrayed as ‘an expression of unrivaled refinement,’ the 2013 Sorento is described by its manufacturer as a more mature and sophisticated SUV that sets a new standard for style, comfort, performance, safety, and convenience.

Although the basic body shape has been retained, the design of the fog Lamps, radiator grill, LED rear combination lamp, rear bumper, and the tailgate has been enhanced and the LED positioned above the headlamp enhances the vehicle’s appearance and market appeal. Larger 19-inch alloy wheels (up from 18 inches) creates a sportier appearance that augments road presence and delivers better performance.

Among the new options available in the 2013 model are Adaptive Front Light System (AFLS) — motor-powered headlamps that automatically point in the same direction the vehicle is heading based on traveling speed and steering wheel movements, resulting in improved nighttime driver visibility; Cornering Fog Lamps for better side visibility; Ventilated & Driver Memory Seats (air blown through the cushion and back of both front seats helps keep occupants cool in extreme temperatures) and Flex Steering System that provides three modes — normal/sport/comfort — to fit driver preferences with motor-driven power steering and Super Vision Cluster.

Kia sells more than 2.7 million vehicles a year worldwide. The company has 15 manufacturing and assembly operations in ten countries and a network of distributors and dealers covering 149 countries. Kia Motors Corporation’s brand slogan – “The Power to Surprise” – represents the company’s global commitment to surprise the world by providing exciting and inspiring experiences that go beyond expectations.