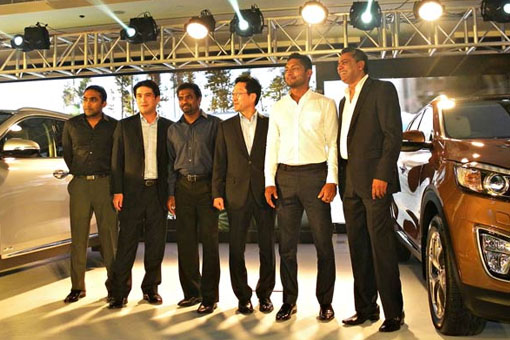 Wednesday, 1st April 2015: A sporting icon, a legend and a genius came together today to launch the all-new 2016 Kia Sorento SUV in Colombo, an automotive icon in its own right, and the drive that the extraordinary trio have in common.

Driven on to a stage in the packed ‘Oak Room’ at the Cinnamon Grand, Kumar Sangakkara, Muttiah Muralitharan and Mahela Jayawardena received the keys to their new Sorento vehicles as part of the gala launch of the dramatically reengineered, wider and longer Kia Sorento, a masterpiece of elegantly sculpted surfaces and an ultra-sophisticated interior.

Already one of the most popular SUVs on Sri Lanka’s roads, Kia Sorento raises the bar for design aesthetics and class-leading performance with its 2016 Third Generation edition, which is structurally stronger, more comfortable and even safer than its predecessors.

Speaking at its ceremonial unveiling, Mahen Thambiah, Managing Director of Kia Motors (Lanka) said: “The Sorento has earned a reputation for being a genius at what it is designed for, has become an icon on our roads, and has, in just about 10 years, attained the status of a legend. These are aspects that, to us in Sri Lanka, are best represented by our cricketing heroes Kumar, Murali and Mahela.”

“We are, therefore very proud to say that the Kia Sorento has been the vehicle of choice of these remarkable sportsmen for many years, and that they will be the first to receive the all-new 2016 Kia Sorento.”

Redesigned with a sleeker, more sculpted exterior, the new Sorento exudes sophistication with an edge. It has a wider stance and longer wheelbase for even more versatile cabin space with available seating for up to seven. A Smart Power Liftgate for touch-free opening and a hatch adjustable to the driver’s height makes it a highly stylized, modern utility vehicle.

Since its debut over a decade ago, the Sorento has been a model of Kia’s tireless commitment to safety. With the 2016 Sorento, named a 2015 IIHS (Insurance Institute for Highway Safety) Top Safety Pick, the legacy continues. Featuring trusted active and passive systems, including Electronic Stability Control (ESC) the new Sorento sports a reinforced body of 53% advanced high-strength steel.

With an overall length of 15.68 feet, width of 6.2 feet, height of 5.5 feet with roof rack and wheel base of 9.1 feet, the new Sorento is larger than the 2015 version, tougher and more luxurious, making it the car of choice for those who drive to seek out adventure.

Kia Motors (Lanka), which has represented the Kia brand in Sri Lanka since 1996, was adjudged the ‘Most Improved’ distributor in the region at the 2014 Asia – Pacific Parts Conference of MOBIS – the spare parts division of the Kia-Hyundai Group. In May 2013, the company was adjudged Kia’s ‘Distributor of Distinction’ in acknowledgement of ‘Professionalism of the Highest Degree and Outstanding Sales Performance in the Asia Region.’

A maker of quality vehicles for the young-at-heart, Kia Motors Corporation (www.kia.com) was founded in 1944 and is Korea’s oldest manufacturer of motor vehicles. Over 3 million Kia vehicles a year are produced in 10 manufacturing and assembly operations in five countries which are then sold and serviced through a network of distributors and dealers covering around 150 countries. Kia Motors Corporation’s brand slogan – “The Power to Surprise” – represents the company’s global commitment to surprise the world by providing exciting and inspiring experiences that go beyond expectations.