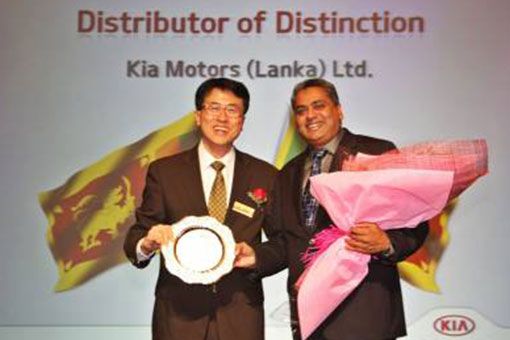 Top Korean car maker Kia has adjudged its sole distributor in Sri Lanka Kia Motors (Lanka) Ltd., as the company’s ‘Distributor of Distinction’ in acknowledgement of ‘Professionalism of the Highest Degree and Outstanding Sales Performance in the Asia Region.’

The award was presented at the annual Asia Distributors Convention of Kia in Manila, Philippines recently.

“We are absolutely delighted to win this award, as it follows years of hard work that has resulted in the Kia brand enjoying very high equity in the Sri Lanka market,” Mr. Thambiah said on his return to Colombo.  “Over 2011 and 2012, Kia has emerged as one of the top two most popular brands in the SUV segment, which is very competitive.”

He disclosed that combined sales in Sri Lanka of the Kia Sorento and the Kia Sportage totalled 3,000 units during this period, making the brand one of the most visible on the country’s roads.

Kia’s design-driven aesthetics and performance and value-for-money pricing are the principal factors behind the brand’s popularity, Mr. Thambiah said. “The brand has lived up to the pledge made by Peter Schreyer when he took over as Design Chief of Kia, that he would create design-driven vehicles with all the advances of technology, performance, features and comfort without the attendant high price of other design-driven brands.”

Kia Motors (Lanka) Director Rodney Mason said the company is in the process of implementing a substantial expansion of service and customer support infrastructure to keep pace with the growth of the brand’s market share in the automotive sector. Work has begun on a three acre site at Malabe for an enhanced showroom as well as a state-of-the-art Logistics Centre. Plans for a sales and service centre in Kurunegala are also being finalised.

“For the interim period, an additional body shop has been opened at Colombo 8. We have also doubled our inventory of spare parts to cater to the ever-growing population of Kia vehicles in Sri Lanka,” Mr. Mason said.

Kia sells more than 2.7 million vehicles a year worldwide.  The company has 15 manufacturing and assembly operations in ten countries and a network of distributors and dealers covering 149 countries. Kia Motors Corporation’s brand slogan – “The Power to Surprise” – represents the company’s global commitment to surprise the world by providing exciting and inspiring experiences that go beyond expectations.